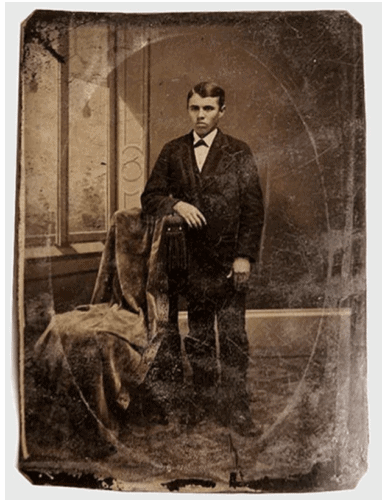 Holy cow!  A 19th-century tintype photo purchased from eBay for just $10 has been identified as an extremely rare portrait of the infamous outlaw Jesse James… worth an estimated $2 million+.  Some call it luck but it has nothing to do with luck…this was a situation where a buyer had expertise. His long time interest in American outlaws paid off!

Fox News reports that Justin Whiting of Spalding, U.K., was browsing eBay in July 2017 when he came across a photo that looked remarkably like the photo of outlaw Jesse James that he had seen in a book.

Having been obsessed with American outlaws for years, Whiting purchased the tintype for its Buy It Now price of $10 in July 2017.

“I noticed the picture for sale — it was $10. It was a bit blurry on the site but when I got it, it was a lot clearer,” Whiting tells SWNS. “I thought to myself: ‘Gee wizz, this could be a real photo!’ I’ve been obsessed with American outlaws for years and read lots of books and study their faces.”

The 45-year-old then took the photo to forensic experts in the United States, including California-based 19th-century photo expert Will Dunniway, who concluded that the photo is a genuine photo of Jesse James at around age 14.