Over 300 piece of Escada at our recent Newport Beach estate sale.

Other than in an Escada boutique, I have never seen so many Escada pieces.

If you love Escada as much as our client, this event was better than Christmas morning.

Mostly bought from Nordstroms and the Escada boutique in South Coast Plaza, all items in mint condition. A little dust on the shoulders from non use is all we found wrong.

The good news is that the pieces were all from the 1990’s when Escada was made in Germany under the ownership of Margaretha Ley. It was at this time that the quality was off the charts. The silk charmuse was thick, the buttons were extremely high quality, and the attention to detail, style, and design was second to none.

Some of the most notable Escada clients have been;  Princess Diana, who famously wore an Escada coat for a formal visit to Berlin in 1987, Kim Basinger who was awarded the Oscar in 1988 in an Escada gown, and Crown Princess Victoria of Sweden wore Escada to the pre-wedding party at the wedding of Prince Nikolaos of Greece. In 2011, she also wore Escada to the Monaco royal wedding, the pre-wedding dinner for the British royal wedding, as well as the state visit to Germany. Sarah, Duchess of York, also wore Escada to Elton John’s White Tie and Tiara Ball in 2011. 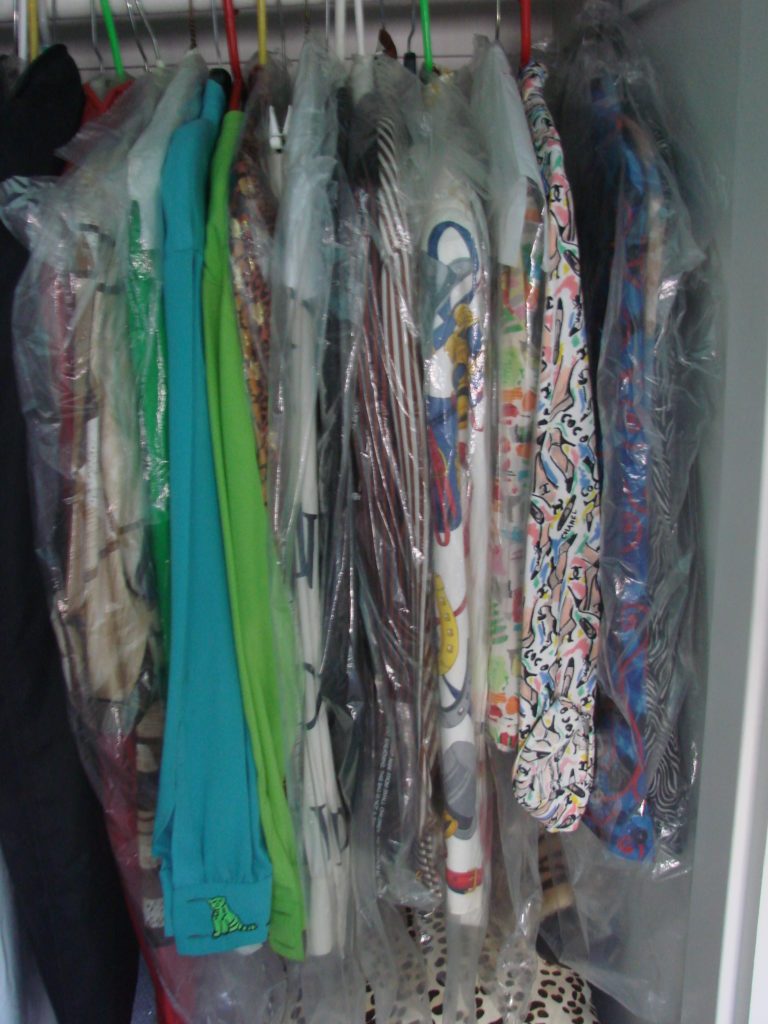 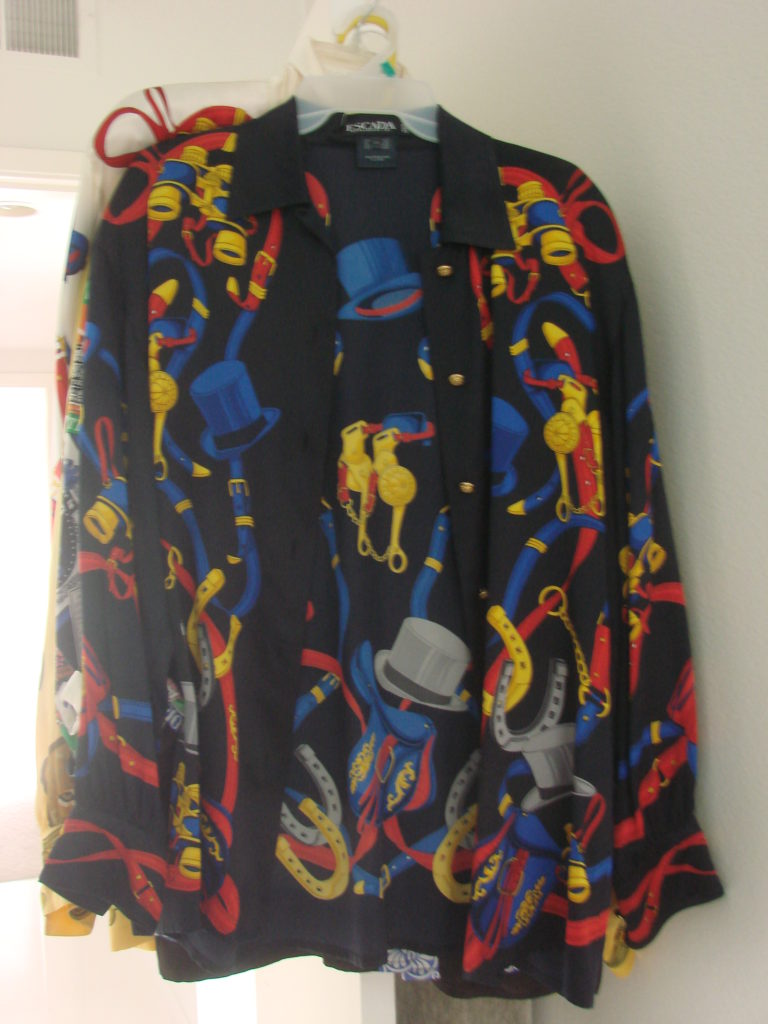 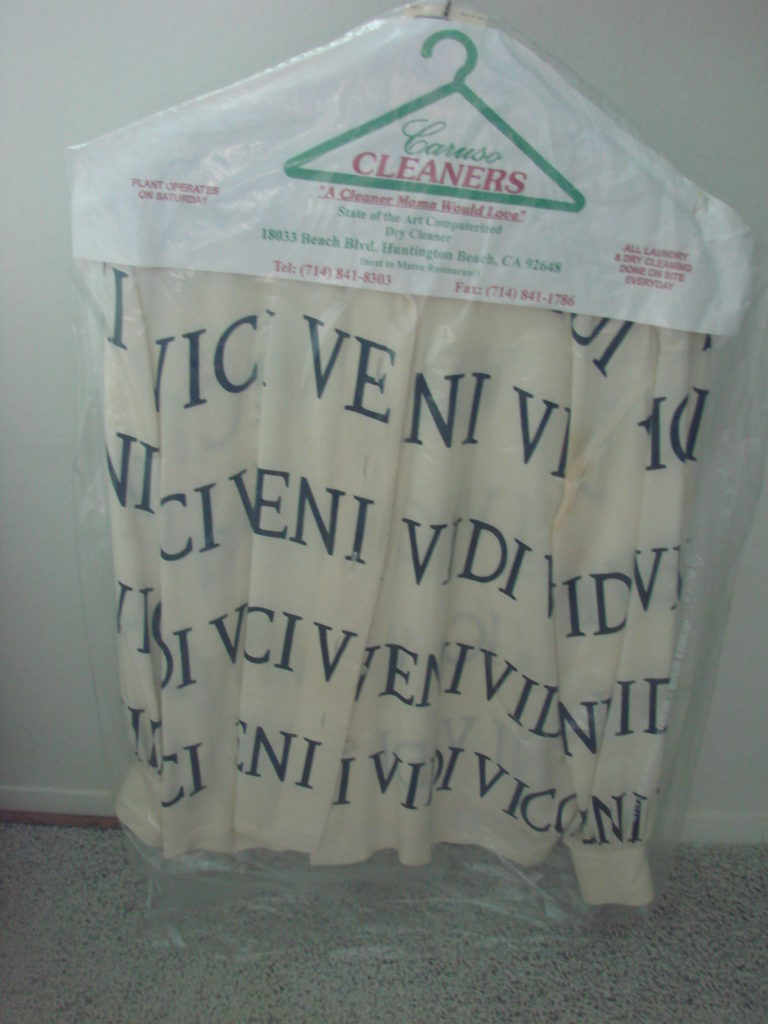 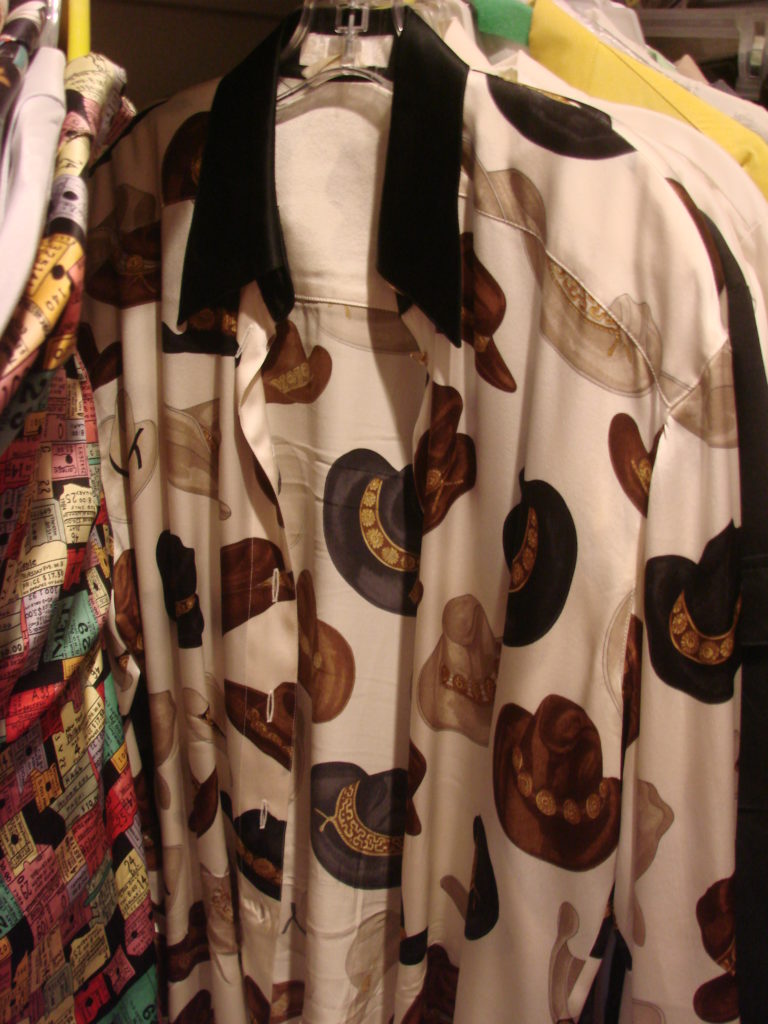 Not only was the volume of Escada clothing huge, she also had Escada handbags, scarves, and jewelry.  She purchased so much that the sales people at Nordstoms and the Escada boutique would always supply her with the “look books” of each season.  Not only was it convenient for her to use for ordering, she tells us it’s a great tool for “inventory”, lol. Seriously for insurance purposes she used it to document the value in case of theft or fire.

Sizes ranged from 6-10 so a range of our lucky buyers took the goods.

For those not familiar with Escada, it started in Germany under the operations of a woman named Margaretha Ley who died of cancer in the late 90’s. It is currently owned by Indian businesswoman Megha Mittal. Recently in September 1, 2016 Iris Epple-Righi joined as the CEO of Escada after 13 years with Calvin Klein and Tommy Hilfiger and Niall Sloan joined Escada as the Global Design Director on August 1, 2017 after designing for luxury label Burberry and Hunter 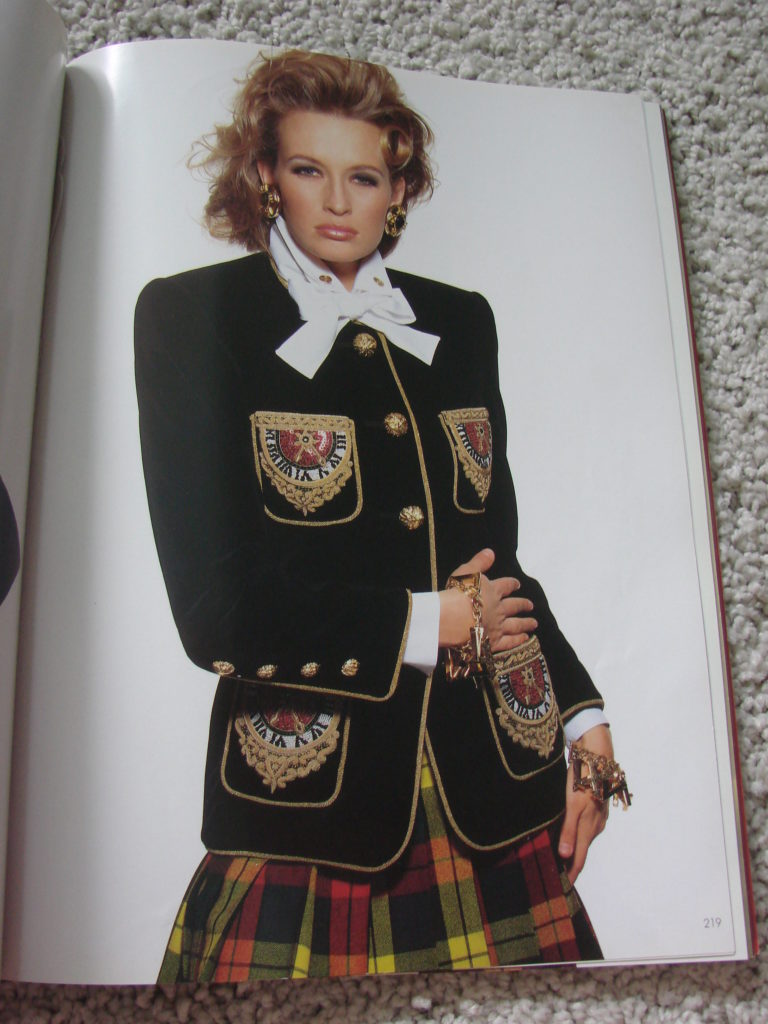 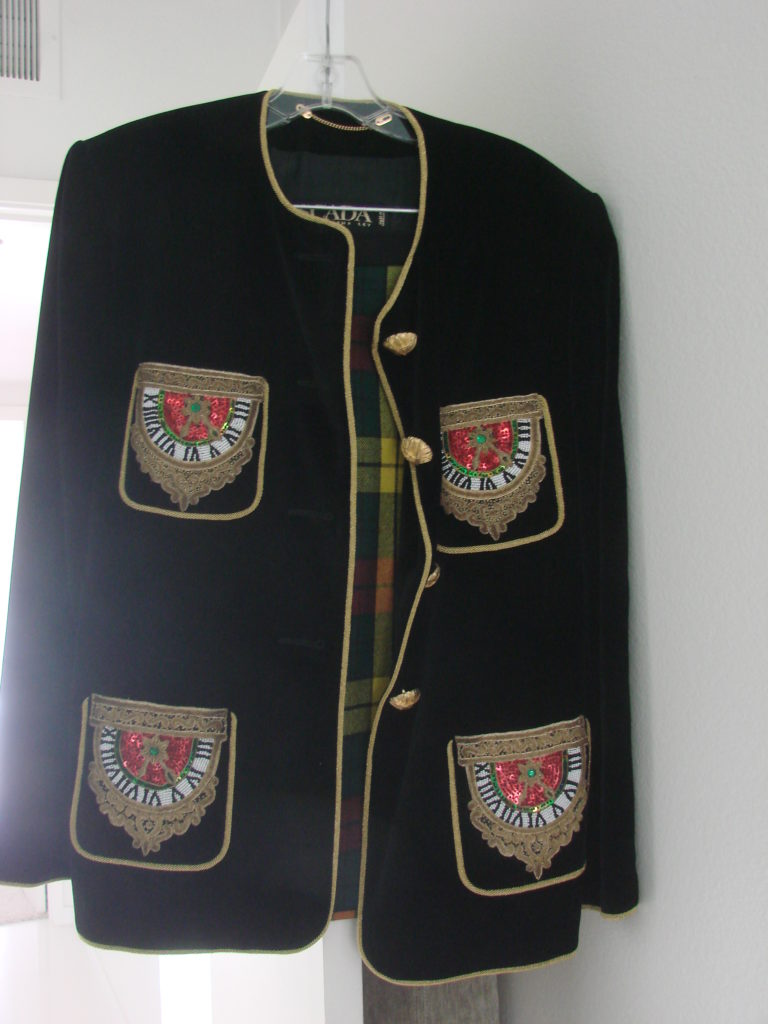 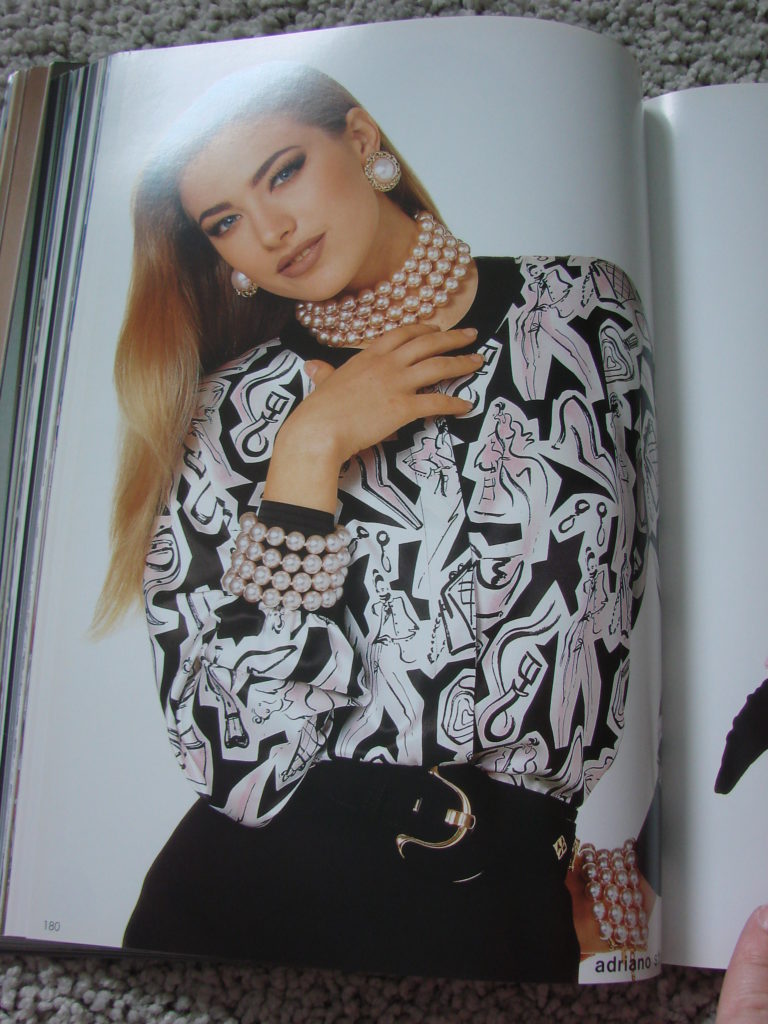 Our client shared some stories about her Escada collection that are both inspirational and entertaining.

One day, when she was about 23 years old she was walking through Nordstoms to get to her car and when walking by the “Gallery” Department, a soft Yellow blazer caught her eye. When she touched it, should could not believe how soft it was.  She slipped it on, and said it fit so beautifully it made her feel like a million bucks.  She looked at the lable and was not familiar with it, but she made a mental note.  The price tag read $1500.00 and she couldn’t understand who could afford a blazer at this price?  She noticed that the fabric content was 100% cashmere, but still $1500.00 was out-of-bounds for her.

The other story she shared was after the Escada trunk show at Nordstroms and had to borrow a friends SUV to get all the packages home.

After the brand changed, she went on to exclusively wear Thierry Mugler with a touch of Chanel, Versace, and Armani once in a while. Now in her retirement she lives in a sarong in the summer, and sweats in the winter.

Our client tells us that having our estate firm assist her with her Escada liquidation was the only way it could have happened. It would have been too much work to sell off one piece at a time herself.  It would have taken for ever plus she didn’t want to deal with all the varous things that can go wrong if the item didn’t fit the new buyer etc.

We are truly the best choice when selling off Escada, Vuitton, Hermes, Chanel and other designer items and wardrobes.