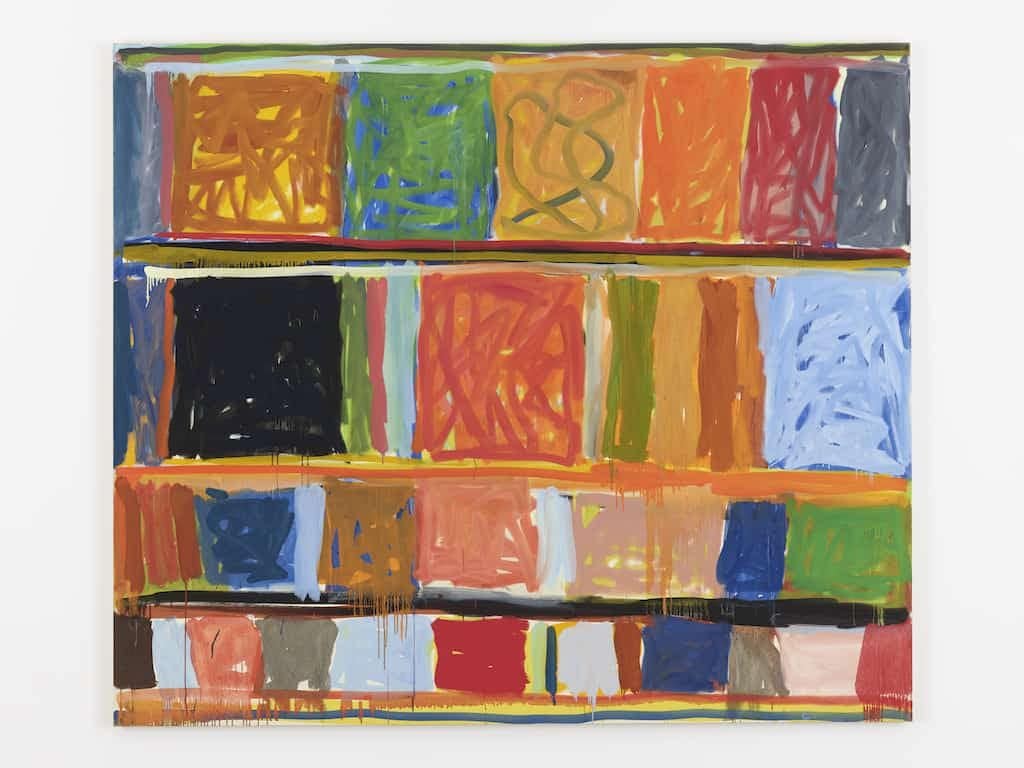 The 49th edition of Art Basel opened to the first tranche of VIP guests on Tuesday morning, sparking a mild-mannered stampede across a two-level emporium heaving with booths presented by some 290 galleries. The art market, especially for contemporary work, is rather buoyant these days, as evidenced by last month’s auctions in New York and the demand displayed by a band of international collectors. Similar to action surrounding the auction industrial complex, a number of sales took place before Art Basel even opened its doors.

Such was the case for a handsome geometric abstraction by Stanley Whitney: Untitled (1999), which sold from the booth for Lisson Gallery for $400,000. Also already spoken for was David Hockney’s nine-panel landscape The Big Hawthorn (2008), which London’s Annely Juda gallery sold for “an eight figure sum,” according to David Juda. “We were planning to show it,” the dealer said, “but we sold it before it got here.” (The work was formerly featured in the Guggenheim Bilbao’s “David Hockney: A Bigger Picture” exhibition in 2012.)

The large booth for Sprüth Magers bristled with politically hard-edged works, a relative rarity in Basel. Among them was Kara Walker’s intense, semen-spewing composition Another Ancestor (2010), a graphite and pastel work on paper that sold to an American collector for $125,000. John Baldessari’s 1990 conceptual piece Four Types of Balance (with Basketballs), comprising black-and-white photographs and vinyl paint, sold for $550,000, and George Condo’s expressionistic Green and Purple Head Composition (2018)—with acrylic, charcoal, pastel, and pigment stick on linen—sold for more than $1 million. Condo was richly represented at various other stands and remains a prolific market stalwart. At the booth for the New York-based Matthew Marks Gallery, Vija Celmins’s 1964 student work Untitled (Knife and Dish), modestly sized at 16 by 18 inches and seemingly inspired by Giorgio Morandi, sold for $1.2 million, while the numbers grew higher at Hauser & Wirth, topped by Joan Mitchell’s Abstract Expressionist oil work Composition (1969), which sold to a private European collector for $14 million. Representation of the important American painter, whose legacy is being advanced by the Joan Mitchell Foundation, recently changed hands from Cheim & Read to David Zwirner gallery, which sold another Mitchell work, Untitled(1958), for a sum in the region of its asking price of $7.5 million. A cursory count of more than ten Mitchell paintings of various sizes and vintages at the fair—also at other stands including those of Richard Gray Gallery and Lévy Gorvy—attests to the artist’s growing stature.

Also at Hauser & Wirth, Louise Bourgeois’s Three Graces, an early sculpture in white painted wood from 1947, sold for $4.8 million, and Gunther Förg’s large Untitled acrylic on canvas from 1993 sold to a private Asian institution for €650,000 (around $763,660). Representation of the Förg estate is new to Hauser & Wirth, which also picked up the late Polish artist Alina Szapocznikow, whose stunning and almost transparent polyester resin work Auto Portrait (1967) sold for $600,000. A second Szapocznikow work with colored polyester resin and electrical wiring, Lampe (ca. 1967), sold for $950,000.

At the booth for Brussels-based Xavier Hufkens, Paul McCarthy’s zany Édouard Manet–inspired CSSC Luncheon on the Grass (2015-18)—a multimedia tour de force including styrofoam, light, wood, plants, sculpey, and paint—sold for $1.5 million. The 3-D scene is apparently related to an epic film being made by McCarthy and his son. The gallery also sold Louise Bourgeois’s Maman (2009), a drawing of a female figure standing between a pair of breasts, for $100,000, as well as George Condo’s oil painting Portrait of an English Lady(2008) for $1.3 million.

There was plenty of market might on display at the stand for New York’s Mnuchin Gallery, led by two important Sam Gilliam works that sold for undisclosed prices. Gilliam is currently featured in the Kunstmuseum Basel exhibition “Music of Color: Sam Gilliam, 1967-1973,” covering a period to which the two sold paintings—Patch from 1970 (part of Gilliam’s “Draped” series) and Misty from 1969 (part of his “Beveled Edge” series)—relate. The gallery also sold Sam Francis’s color-charged Untitled (White Line), from 1958-60, for around $475,000, as well as Mark Bradford’s dynamic 2001 painting You Must Have Fell and Hit Your Head—standing tall at some 6 by 7 feet—in the vicinity of its $3.9 million asking price.

Then there was Carl Andre’s 100 Copper Squares (1968), which Mnuchin sold in the region of $2.8 million. Staring at the minimalist floor piece, the Los Angeles–based private dealer Stavros Merjos said, “This is a surprisingly good fair, both in material and turnout. There aren’t that many Americans here, but it doesn’t really matter. There’s nothing like this.”

Minutes earlier, another VIP attendee, Philip Hoffman, the CEO of the London-based Fine Art Group, observed of the art for sale, “The only questions asked these days are: Is that one of the top ten works? And is that an A-plus picture?”

A standout work within those parameters sold at the booth for Basel’s own von Bartha gallery: Sophie Taeuber-Arp’s boldly colored and geometrically taut Six Espaces Distinct (1939). Still bearing its original artist-designed frame, the work sold for more than one million Swiss francs (or $1 million). “For the age of the painting,” Stefan von Bartha said, “the condition is outstanding. I will sadly confirm we will never have a painting like this again.”

One of the fair’s more interesting displays, in the booth for Paris’s Galerie 1900–2000, playfully featured eight Francis Picabia portraits on paper hanging against a wall-sized stretch of Cindy Sherman wallpaper. Five of the Picabias sold at prices ranging from €55,000–€65,000 ($65,000–$76,000)—including a portrait of Carole Lombard, a storied movie star who died in a plane crash in 1942. As for the unusual presentation, Sherman gave the gallery the green light to stage the Picabia works as they were.

Action was also in evidence at Galerie Thaddaeus Ropac, which sold Georg Baselitz’s Noch kein Braun, aber Rosa (2018) for €750,000 (or $881, 400) and Robert Rauschenberg’s large-scale Ruby Re-Run (Spread), from 1978, for $1.5 million to an unidentified European museum. Nearby in Art Basel’s circus-like installation section Unlimited, Ropac—in collaboration with the New York gallery Metro Pictures—also sold Robert Longo’s Death Star II (2017-18), a chunky cast aluminum sphere  suspended eerily from the ceiling and affixed with 40,000 bullets, to another European museum for $1.5 million. So much for peace across the land.