– Christie’s will be auctioning the most exquisite diamonds ever offered to the market.  It will be a necklace that includes the 163.41-carat, D colour, flawless, IIA type diamond.

Rahul Kadakia,  the ead of Christie’s Jewels indicated; “Over our 251 year history, Christie’s has had the privilege of handling the world’s rarest and most historic diamonds. The sensational 163.41 carat perfect diamond suspended from an elegant emerald and diamond necklace is a class of their own.”

Established in Geneva, Switzerland in 1993, de GRISOGONO was founded by Fawaz Gruosi on three pillars: craftsmanship, innovation and creativity. This exceptional jewel has been created around the largest D colour, flawless diamond ever to come to auction, a 163.41 carat stone, cut from a 404 carats-rough, which was discovered in early February 2016 in the Lulo mine, located in the Lunda Sul Province in Angola.

The “4 de Fevereiro” rough is the 27th biggest rough white diamond ever discovered and the largest in Angola. The rough was analysed in Antwerp and cut in New York, where a team of 10 diamond-cutting specialists were involved in mapping, plotting, cleaving, laser-cutting and polishing the rough 404.20 carat into a unique 163.41 carat emerald-cut stone. The first cut was done on 29th of June 2016, when the 80 year old master diamond cleaver performed a cut along a grain line to cleave the crystal in two. After 11 months of work the polished 163.41-carat stone was ready to be send to the GIA in late December 2016. To date this is the largest D flawless diamond ever to appear for sale at auction.

It took over 1700 hours to create this stunning jewel and it required  a team of 14 craftsmen.

Christie’s is honored to present to the world this masterpiece of unparalleled beauty and exquisite workmanship during their preview exhibitions in Hong Kong, London, Dubai, New York and Geneva. The necklace will be offered in the Magnificent Jewels auction taking place on 14 November in Geneva at the Four Seasons Hotel des Bergues.

Most are impressed just to see the photos! 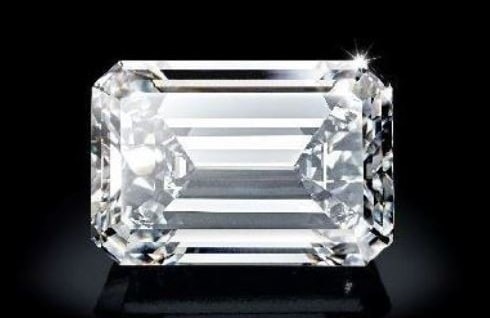